This icon is on the synthronon* of the sanctuary of the katholikon and the following tradition is associated with it.

In the 10th century, during the course of a raid on the Monastery by the Arabs, the deacon-monk Sabbas, who was sacristan (vimataris) at the time, managed to hide the icon in the well of the sanctuary, together with the cross of Constantine, placing a lighted candle in front of them. The Arabs plundered the Monastery and the deacon Sabbas was carried off as a prisoner to Crete. He gained his liberty 70 years later and returned to the Monastery, The younger monks, who knew nothing of the hidden treasures, opened the well on his instructions and found the icon and the cross standing upright on the water and the candle still burning.

This icon is also called Ktitorissa (from ktitor = founder), since its discovery took place during the time of the three founders of the Monastery, Athanasius, Nicholas and Antonius. In memory of this, a supplicatory canon to the All-holy Theotokos is sung every Monday evening, and every Tuesday, the Divine Liturgy is celebrated in the katholikon.

Another story is told of this icon. Once upon a time, one of the monks had difficulty in understanding the meaning of the verse “For a thousand years in thy sight are but as yesterday”, and was filled with sorrow that he could not find anyone to explain this to him. It so hap-pened that at that time the former Patriarchs of Constantinople Cyril and Cyprian were staying at the Monastery and large numbers of monks from all over the Mountain had gathered to receive their blessing. On the Monastery’s patronal festival, the Annunciation of the Blessed Virgin, at the point when the Patriarch Cyril was going to reverence the sacred relics after the customary blessing, the monk heard a voice from the Vimatarissa icon explaining to him precisely the meaning of the verse, which caused him to thank the Blessed Virgin in tears for this miraculous solution to his difficulty.

This icon is a fresco of the 14th century which used to be in the exonarthex, in front of the Chapel of St Nicholas, and was moved to a shrine in the chapel of the same name. In former times, there was a custom for the monks to kiss the icon as they came out of the katholikon and for the Abbot to deliver the keys of the Monastery to the porter.

Tradition relates that one day, in Byzantine times, as the Abbot was giving the keys to the porter, he heard the following words from the icon: “Do not open the gates of the Monastery today, but go up on to the walls and drive off the pirates”. The voice repeated the same words a second time. As he turned to look at the icon, he saw the

Holy Child putting His hand over the mouth of His Mother, saying “Do not watch, Mother, over this sinful flock; leave it to pass under the sword of the pirates, for its transgressions have multiplied.” But the Blessed Virgin, taking the hand of Christ and turning her head a little, repeated the same words. The monks immediately hastened to the walls and saw that pirates had indeed encircled the Monastery and were awaiting the opening of the gates in order to plunder it. The miraculous intervention of the Theotokos saved the Monastery, and the icon has preserved since then traces of the last movements of the figures. From that time on, the monks have kept a perpetually-burning lamp in front of the icon, celebrate in its honour the Divine Liturgy every Friday and chant a supplicatory canon in front of it every day. At one time it was customary for the tonsuring of monks to take place in this chapel.

Also associated with this icon is the life of the St Neophytus, who was ‘attendant’ of the same chapel. At one point, he was sent by the Monastery to serve for a period in a metochi in Evvia (Euboea). There he fell seriously ill and asked the Blessed Virgin to grant him that he should die in his home monastery. He immediately heard a voice telling him: “Neophytus, go to the Monastery and after a year you will be ready.” Neophytus thanked the Mother of God for this extension of his life and told his attendant to prepare for their return. A year later, after he had received Holy Communion and as he was climbing the stairs, Neophytus again heard the voice of the Mother of God, this time in front of the Chapel of the Paramythia, saying: “Neophytus, the time of your departure has come.” On going to his cell, he fell ill, and, having asked and received forgiveness from all his brethren, yielded up his spirit.

This icon is a fresco of the 14th century and is in the narthex of the Chapel of St Demetrius. Tradition relates that a deacon who was the sacristan of the katholikon used to arrive at the meal in the refectory somewhat late every day, because of his duties. One day, when he asked the monk in charge of the refectory for food, he was refused. The sacristan returned to the church, full of anger and indignation, and said to the icon: “How long do I have to go on serving you and toiling, while you do not care even that I should eat?”, and, with that, he took a knife and plunged it into the face of the Blessed Virgin, from which blood began to run, while he himself was struck blind and fell down like a madman. He remained in that state for three years, occupying a stall opposite the icon, where he wept and implored the Mother of God to forgive him. After three years, the Blessed Virgin appeared to the Abbot and told him that she had forgiven the reckless sacristan and would restore his health, but that the hand which had committed the sacrilege would be condemned at the Second Coming of the Lord. When the monk died and the time came, according to the customs of the Holy Mountain, for the disinterring of his remains, it was found that although the rest of his body had decomposed, his right hand had remained intact and was completely black. The hand of the sacristan is preserved today in the katholikon, but in a very delapidated state, since Russian pilgrims were given to taking small pieces of it, under the impression that it was a sacred relic.

Another story about this icon relates that a priest, visiting the Monastery, questioned the truth of the miracle related above, but when he put his finger into the point where the icon had been damaged, it immediately ran with blood. The priest was aghast and fell down dead before he was able to leave the katholikon.

This too is a wall painting, in the mesonyktikon of the katholikon. It is so named because a voice was heard from it (antiphonise = ‘it answered back’). Tradition relates that the Monastery was once visited by the Empress Placidia, daughter of Theodosius the Great. While she was approaching the katholikon with the intention of entering by the small side door, she heard a voice coming from the icon: “Stay where you are and come no further. How dare you, a woman, come to this place?”. The Empress, overcome with fear, asked forgiveness from the Mother of God and left the Holy Mountain immediately. To commemorate this miracle, she paid for the building of the Chapel of St Demetrius.

The icon of the Eleousa is kept in the same chapel, above the shrine on the left. It dates from the 15th century and comes from the Russian Skete of St Andrew, from which it was recently brought to the Monastery. According to information given by Gerasimos Smyrnakis, the icon was at one time built into the wall of a mosque in Constantinople which had formerly been a Christian church. It was discovered by some Christian workmen who were repairing the mosque in 1893 and secretly sold to Sofronios, the steward of the Skete’s metochiin Galata. From there it was brought by Russian monks to Mount Athos and placed in the kyriakon of the Skete of St Andrew.

This icon dates from the 14th century and is in the Monastery’s oil store. From there it is taken to the katholikon on the Friday after Easter, its feast day. Tradition relates the following miracle: at a time when there was a shortage of olive oil in the Monastery, the St Gennadius, who was in charge of the Monastery’s oil supplies, began to economise by giving oil only for the needs of the church. The cook, however, complained to the Abbot, who ordered Gennadius to be unsparing in giving oil to the brotherhood, putting his trust in the providence of the Lady Theotokos. The Blessed Gennadius went one day to the storeroom and saw the tank running over with oil, which had reached the door. From that time, the icon has emitted a remarkable fragrance.

This is painted on the wall above the outer gate of the Monastery. In 1822, a group of Turkish soldiers arrived at the Monastery and one of them, seeing the icon, shot at it, the bullet making a hole in the Virgin’s right hand. As a result of this act, the soldier went mad and hanged himself from an olive tree in front of the Monastery. The rest of the Turks were terrified by this divine retribution and left the Monastery immediately. Moreover, when the commander of the detachment was told of the act of the soldier, who was his nephew, he ordered that he should be left unburied as a malefactor. 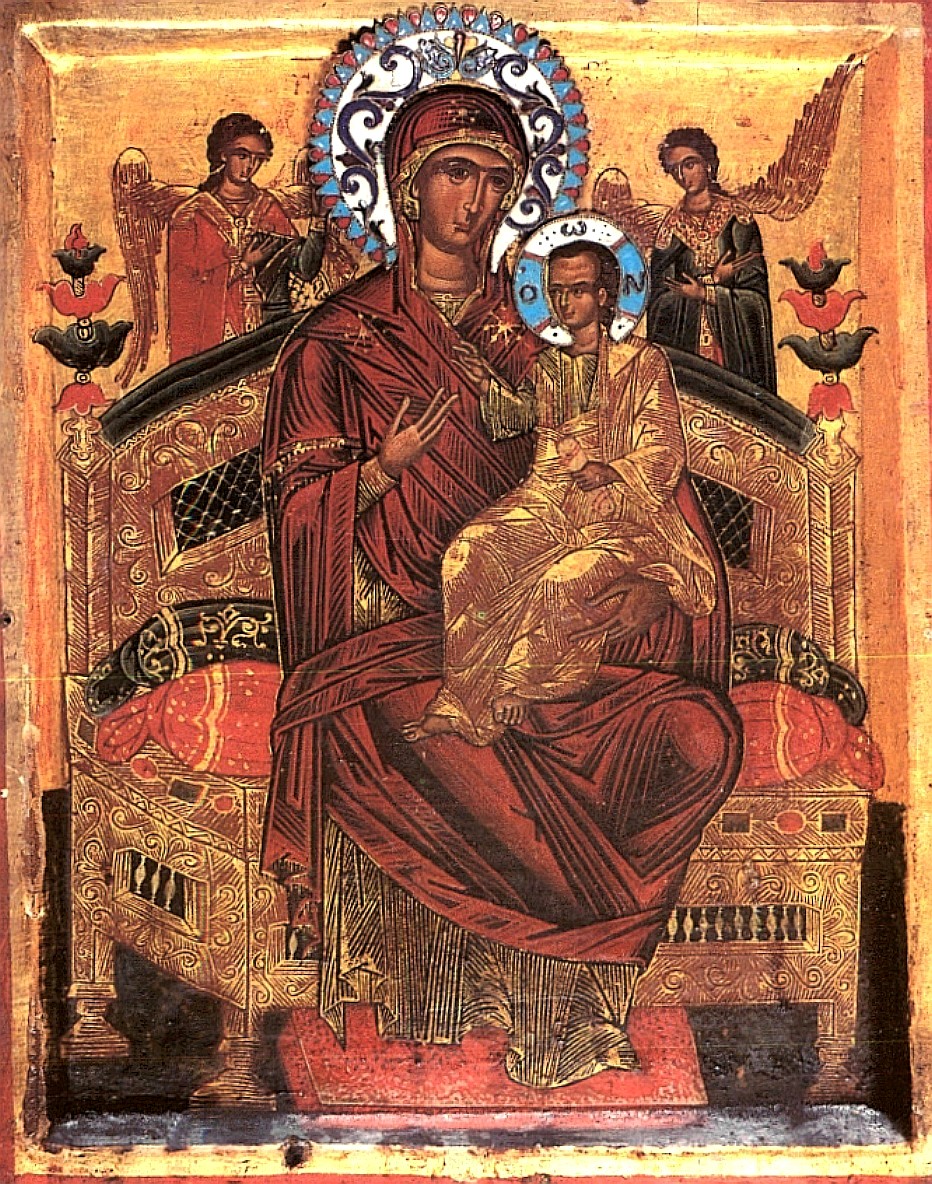 This miracle-working icon dates from the 17th century and hangs on the left hand shrine of the eastern column of the katholikon. According to the accounts of the elders of the Monastery, the first indication that this icon bestowed especial grace was the following event: one day a young man entered the church and went to reverence the icon. Suddenly the face of the Blessed Virgin shone and some unseen force hurled the young man to the ground. When he came to, he confessed with tears to the fathers that he had been living far from God and that he had been involved with magic. The miraculous intervention of the Virgin resulted in the young man changing his way of life and becoming devout.

This icon also has the property and special grace from God of healing the dreadful affliction of cancer. Large numbers of cancer-sufferers have been healed in recent times following a supplicatory canon chanted before the icon of Our Lady Pantanassa. 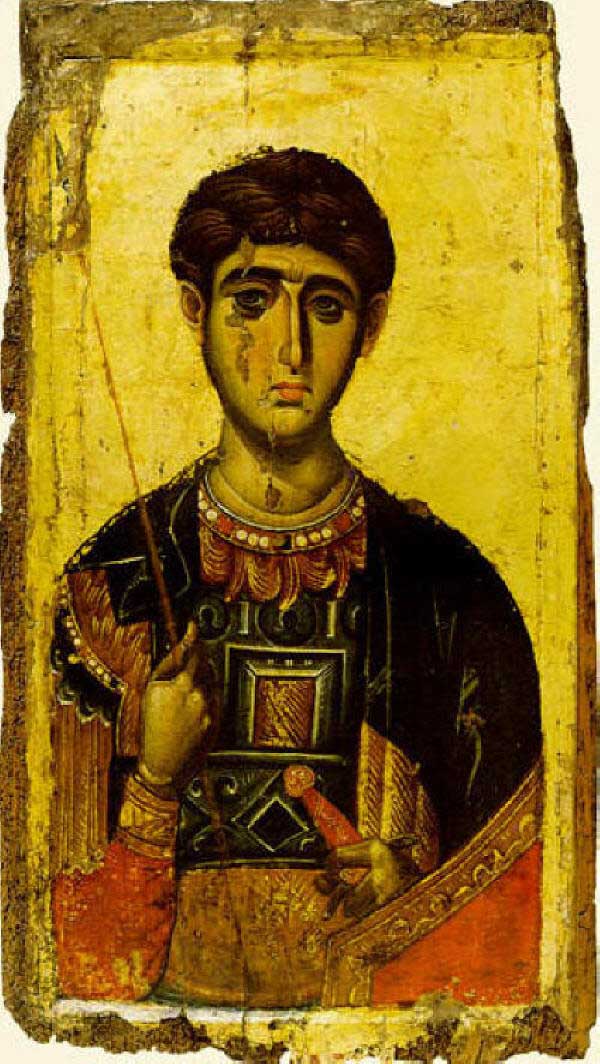 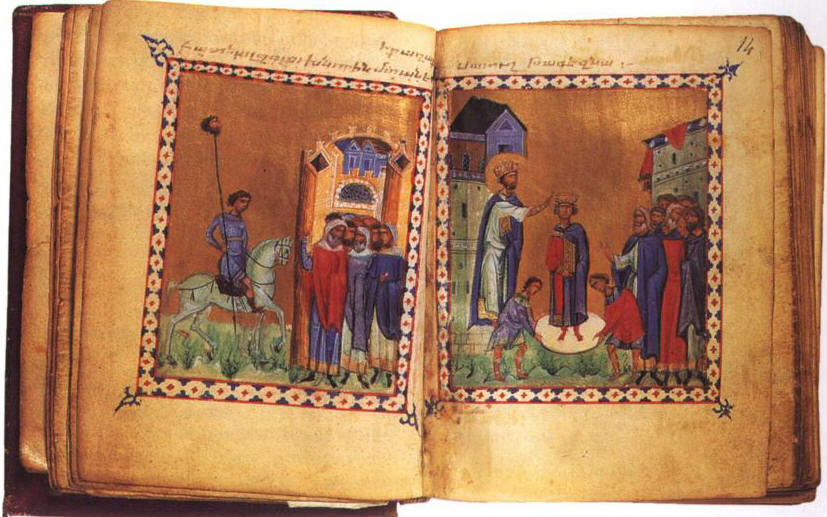